Forever Evil #1 has hit stands. The Top 5 spoilers with interior art are here including a cover gallery with all 9 cover and variant versions.

It turns out that some of our DC Comics New 52 puzzle pieces were placed correctly in terms of the post Trinity War DC New 52, others didn’t fit, and others have yet to come to pass as Forever Evil is just starting.

Below are the Top 5 spoilers from Justice League #23; the end of Trinity War and the beginning of DC New 52’s Forever Evil. (Also, don’t forget to check out the HUGE spoilers from Catwoman #23 and Supergirl #23 that lead into Forever Evil and may have been overshadowed by Trinity War. There is also an equally huge reveal in Flash #23 as we finally learn who is the Reverse Flash in the New 52.)

There be SPOILERS below for the Trinity War finale in Justice League #23. Proceed with caution.

(5) Who is The Society’s The Outsider?

The evil Outsider has been mobilizing the Secret Society of Super-villains in the DCU to serve the Crime Syndicate when they appear. And, the Outsider is Alfred Pennyworth from Earth 3. He’s the evil butler for Thomas Wayne, the Crime Syndicate’s Owlman, and Alfred welcomes him to Prime Earth in the issue. 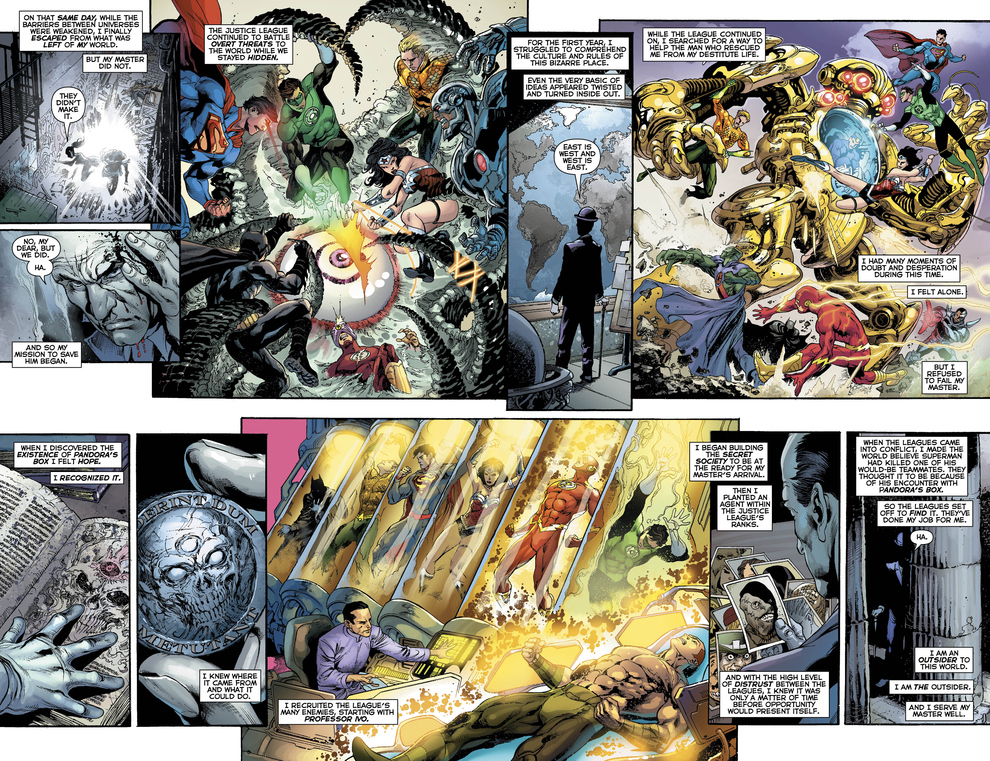 If the solicits for the coming months are to be believed, not all of the Secret Society of Super-villains will embrace this role.

It was right there along, but we all missed the simple connection. While in Justice League Dark #23 we learned Pandora’s Box was not a prison for the Seven Deadly Sins, but a gateway of sorts, we should have seen its connection to the New Gods’ “Mother Box” and its boom tunes. They are both science-created dimensional “box” gateways. 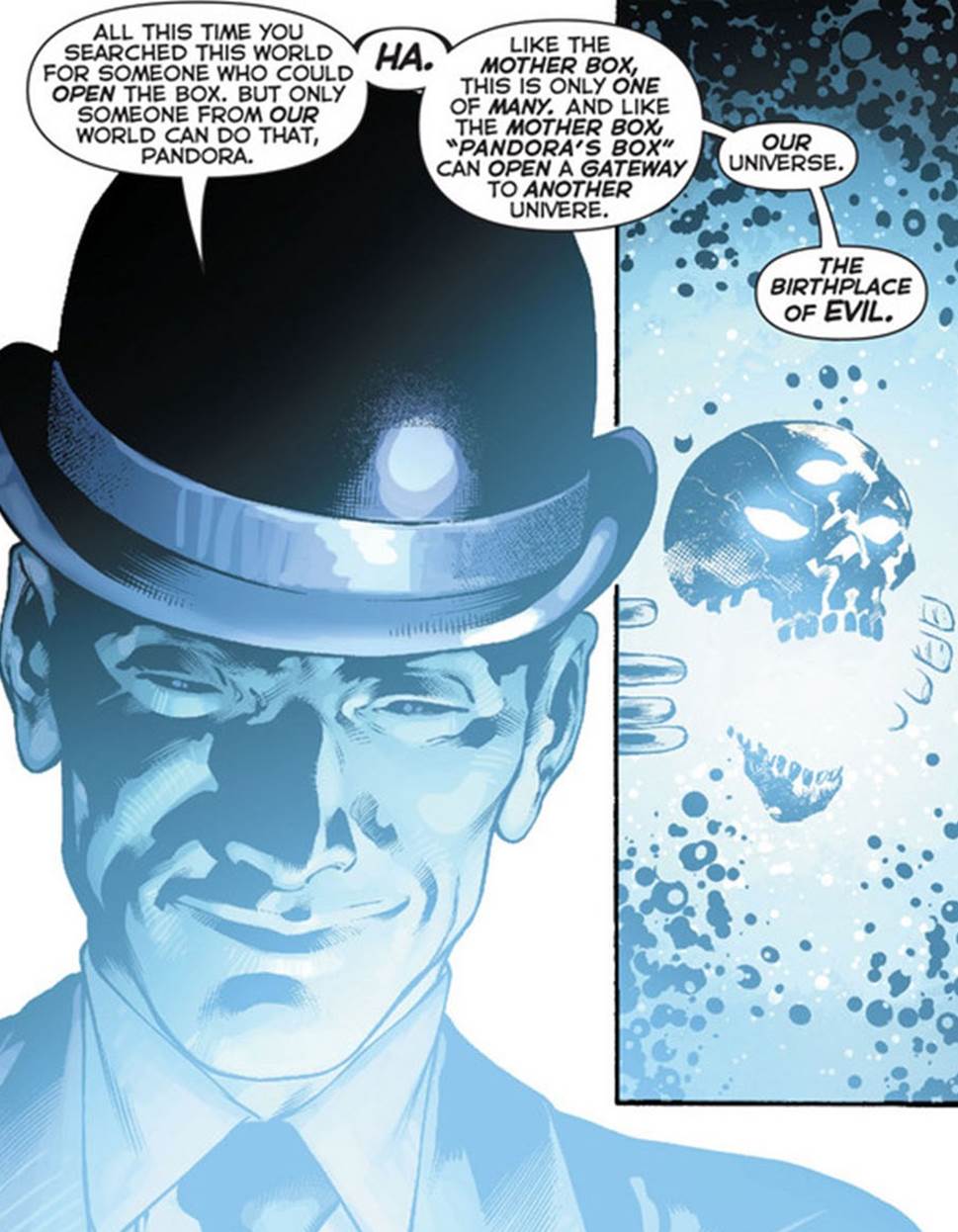 Pandora’s Box can only be opened by someone from Earth 3. In Justice League #23, that is Earth 3’s Alfred Pennyworth, the DC New 52’s The Outsider.

(3) Who else is on the Crime Syndicate team from Earth 3 and who is their prisoner? 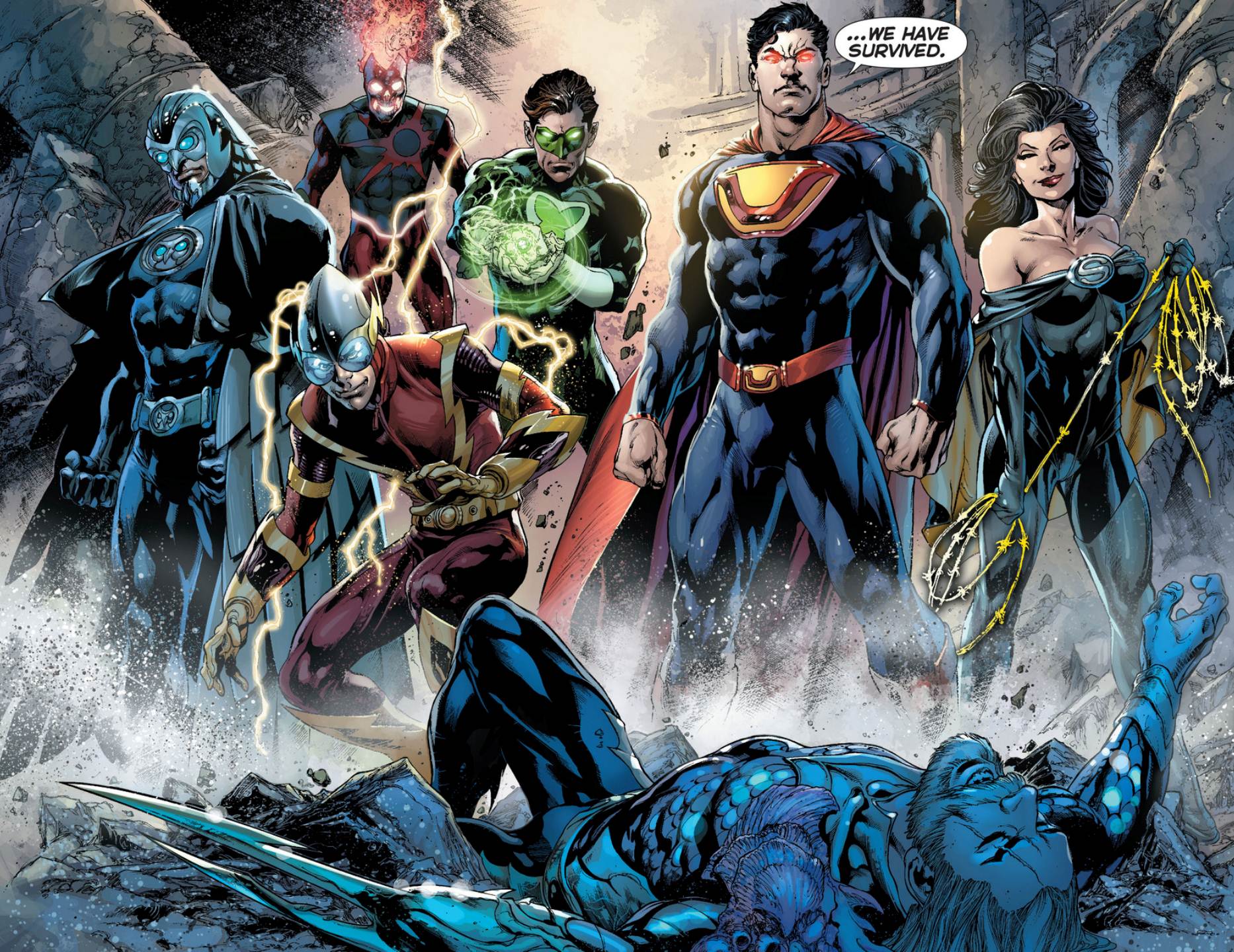 In Justice League #23 we learn that the Crime Syndicate also has Sea King (evil Aquaman) and Atomica (evil Atom). The former doesn’t arrive alive on Prime Earth with the rest of his team.

The Crime Syndicate also brings with them a hooded prisoner into Prime Earth as part of the cliffhanger pages of Justice League #23. The simple answer would be that it is likely the heroic Lex Luthor of Earth 3, like the pre-Crisis of Infinite Earths version, but DC doesn’t do a lot predictable in the New 52, so do you have any guesses on the prisoner?

Well, the Trinity is code for Earth 3’s war on Earth Prime. Trinity = 3. Kind of an underwhelming revelation, but I get it.

(1) Who is the traitor in the Justice League and which Leaguer dies?

Turns out the Justice League of America’s resident mole in the Justice League, the female Atom Rhonda Pineda is also a double mole, as she is really Earth 3’s evil Atom a.k.a Atomica. She explains her allegiances in a mischievous way in the issue. She travelled with The Outsider to Earth Prime when the multiversal dimensional barrier was weakened when Darkseid tangled with the Justice League at the dawn of the DC New 52.

Also, the Grid is revealed to be a sentient evil computer virus from Prime Earth who takes over Cyborg’s armor and purges his flesh, which Simon Baz Green Lantern preserves. 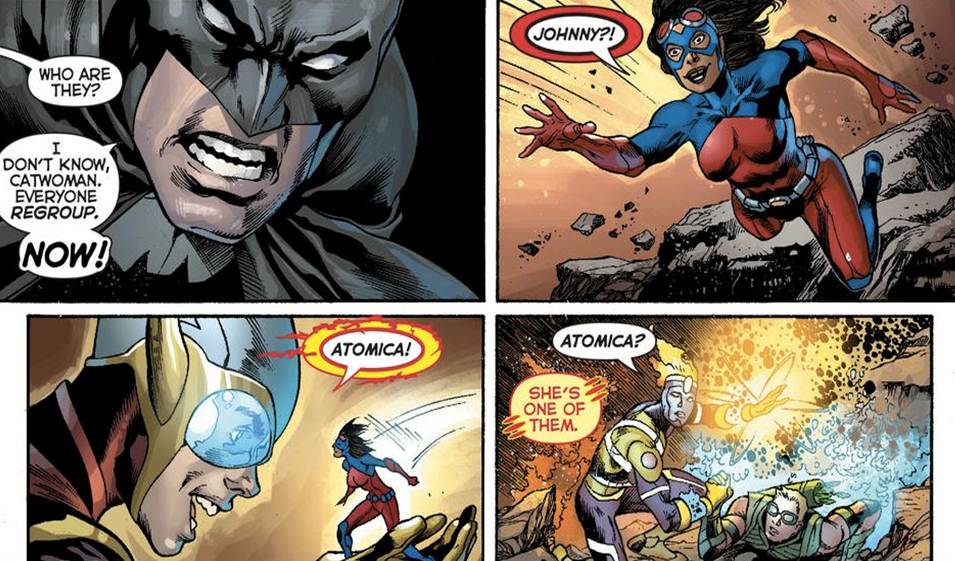 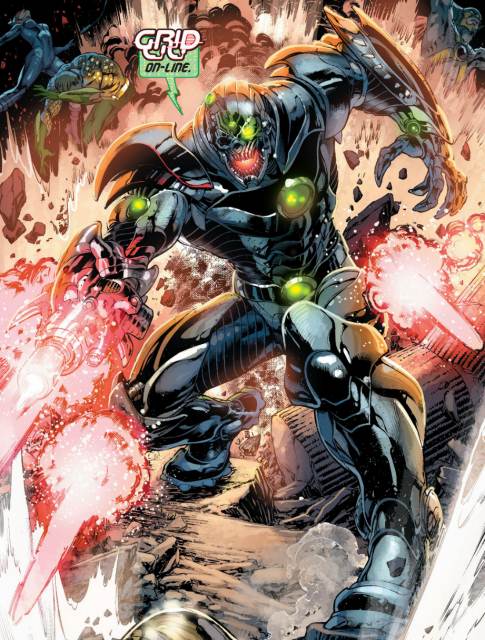 So, Prime Earth’s The Grid appears to be willingly working for Earth 3’s The Outsider and Atomica> I imagine he will become the evil Cyborg analogue for the Crime Syndicate.

Overall Justice League #23, and the spoilers above, made for an excellent story and capstone to two years of Justice League stories orchestrated by writer Geoff Johns. The last page does directly tie into Forever Evil #1 out next week.