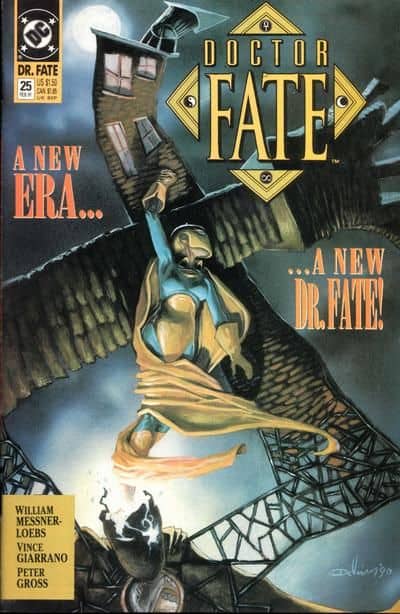 Spoilers (from twenty-four to twenty-five years ago)

I recognize that I’m going through this series all out of order, but now that I’ve read all of JM DeMatteis’s issues with Dr. Fate, it’s time to take a look at his successor, William Messner-Loebs, and what he chose to do with a series that had its status quo completely upended, but that also left him with what was essentially a blank slate.

Messner-Loebs is an interesting writer, with an appreciation of quirkiness.  He’s the guy that had Wonder Woman working in a fast food taco restaurant.  Digging into this, I’m curious to see what he chose to do with Kent and Inza Nelson, who are freshly returned from the grave.

So where I praised the DeMatteis and McManus run for being very non-traditional and basically impossible to publish in today’s comics industry, I think that goes double for William Messner-Loeb’s run with Inza and Kent.  There are very few ties to the DC Universe, in the form of guest characters or villains, and a very wonky story structure was used throughout.

The central concepts of this series were an exploration of how to make cities liveable, shared spaces, and an examination of modern marriage when traditional gender roles are upended.  I’m not sure if either of these concepts are dealt with sufficiently, but they run through the book in interesting and unexpected ways.

The neighbourhood in uptown New York goes from being a gutted wasteland to a vibrant community with a wide diversity of race and temporal beginnings.  Gentrification is addressed, both in the form of the Nelsons themselves, and in Thomas Bridge’s plans for the area.  We get to know people at a variety of ages and stages in their lives, from old widows to young street junkies.  I just don’t know that there is enough of this stuff to say that Messner-Loebs really managed to say anything special about it.  There is also a frustrating inconsistency to how some of these characters are portrayed and used over the course of the run.

As for the marriage aspect, that is much more central, but perhaps equally unresolved.  Kent has a hard time accepting that Inza has become Dr. Fate.  That’s an interesting thing to explore, especially considering that these are essentially Golden Age characters, who have, I feel, too quickly adopted the sentiments of the modern era.  Even Captain America was shown as more of an old fashioned character most of the time.  Still, I’m not sure that I can name another comic that addressed this kind of thing so early in comics’ history, and appreciate that Messner-Loebs took an approach like this. 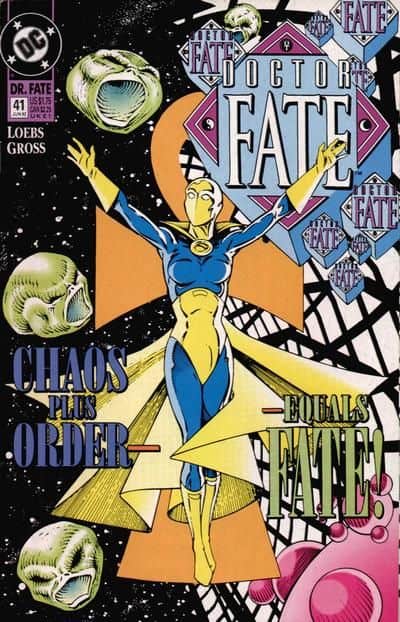 I wish DC published Statements of Ownership with press runs in their comics, because I’d really like to see what the numbers were like on this book.  Today?  This couldn’t have lasted six issues, and that’s a real shame.

The art on this title was interesting.  Vince Giarrano is a good artist who never really got a lot of acclaim.  His unique approach to the art really set the tone for the later artists, with the result that his successor, Scot Eaton, never quite looked right on the book.  Peter Gross, who I think is one of the quintessential Vertigo artists, did a terrific job of marrying the two styles, and made me wish the title ran for longer.

After this, DC let Dr. Fate lie fallow for a while, before launching the Fate title as a part of Zero Hour.  This is the mullet, pouches, and glowing ankh-symbol eye version, and I will admit that I never bought or read a single issue.  It looked terrible.  After that, we saw the more traditional approach that Geoff Johns took to the character, which worked very well in JSA, before the current New 52 version of the character, which has had great art but very boring stories.

If you’d like to read my column about the Dr. Fate comics that came before this series, you can check this link:

These comics were never collected in trade, so if you want to read them for yourself, you’re going to have to do some digging (or, probably, clicking at Comixology, but that feels like cheating).