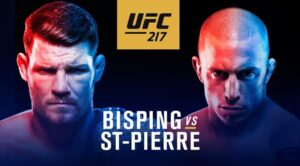 Michael Bisping on Georges St-Pierre’s retirement: ‘GSP is who young fighters should model themselves after’

Last week, Georges St-Pierre announced his official retirement from MMA. Widely considered one of the greatest fighters of all time, GSP is leaving the sport as one of its most decorated fighters, having won titles in two weight classes in the UFC and holding the record for most wins in title fights, among a number of other records as well. Such is the esteem St-Pierre is held in that his announcement was met with almost unilateral respect among the MMA community. Even the man he took the middleweight title off of, Michael Bisping, had to tip his cap to the MMA legend.

Speaking recently on his Believe You Me podcast, Bisping joked about being the man to retire St-Pierre, before giving the all-time great his full respect. 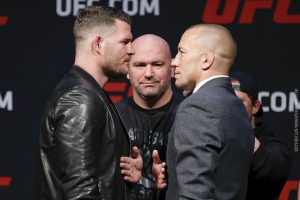 “It’s what I do. He was in there and he took those right hands, it wobbled his brain, he went to the hospital, had a brain scan, right before he choked me out unconscious, he was in a bad way, and he was like, ‘I don’t want to go through this again,’” Bisping joked. “‘I don’t want to experience the hardship of a fight with Michael Bisping ever again.’

“I just want to say, listen, Georges St-Pierre, absolute legend of the sport. Absolute legend. God bless and good luck in everything that you do from here on out. I always said that Georges St-Pierre was the person that a young fighter should model themselves after. They really should. Always strive to learn new training methods. Training smart, fight smart, professional in and out of the cage.”

Bisping defended his middleweight title against St-Pierre at UFC 217, St-Pierre’s first fight in the octagon in four years after taking an extended hiatus following his controversial win over Johny Hendricks at UFC 167. In the lead up to the fight, things got a bit chippy between GSP and Bisping, with Bisping’s trash-talking persona coming to the forefront. In the end, St-Pierre had the last laugh as he choked Bisping unconscious in the third round to win the middleweight title. Even so, Bisping doesn’t regret saying anything. 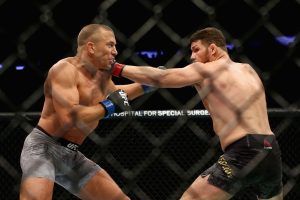 “Of course I talked a ton of sh*t leading up to the fight because that’s what you’ve got to do to make it interesting,” Bipsing said. “But I had a lot of respect for GSP. That’s not to say I fabricated everything. I meant what I was saying to him at the time. We’re gonna fight, he thinks he can beat me? I take that personally.”

Bipsing himself retired not long after the St-Pierre bout, taking one more fight, a short-notice bout against Kelvin Gastelum, the he lost by first-round KO. He considered fighting once more but ultimately called it quits last summer due to his mounting injuries, injuries that he joked gave GSP an unfair advantage and cost him his title.

“Had I not had a bad eye and broken ribs, I would’ve beat you. So you got lucky Georges,” Bisping joked. “Bum knee, bum ribs, bum eye, my wrist, I mean Jesus Christ it’s amazing that I made it to the octagon. Not to take anything away from Georges because that’s not what I’m trying to do here. These are just facts.”

Both are class acts.