Making Sense Of TWO Wally West The Flash and A Confession?

What Did Poison Ivy, Harley Quinn and Booster Gold Do?

Building on the stunning leaks by fans after reading Heroes in Crisis #8 plus what DC revealed on their own, there are still some confusing elements of how Wally West the Flash is the killer here. 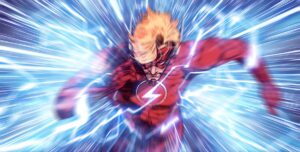 Beyond even believing that Wally West the Flash is capable of mass murder, his cover-up is the other confusing part.

…plus some future virtual reality tech of Booster Gold that Wally uses convince Booster and Harley Quinn that the other was the Sanctuary Killer.

I still can’t believe how calculating Wally West the Flash about the cover-up despite, seemingly, mental illness causing him to lose control and become one of DC’s most notorious mass killers.

Putting aside my love of Wally West the Flash and that he is MY Flash, this story is an emotional roller coaster that broke Wally’s heart and mine. That’s the story’s strength along with the book’s art. The story’s weakness is the explanation for Wally becoming a killer and his cover-up; it is too convoluted. That is leading me to believe that maybe this issue is simply what Wally believes is true in the same way earlier issues depicted what Booster Gold and Harley Quinn believe to be true. Is there a different hand at play here? Is there the true villain yet to be revealed in the next issue finale? I sure hope so. On the strength of story and art, and taking a few points away for the convolution, I give this story 7.5 out of 10.