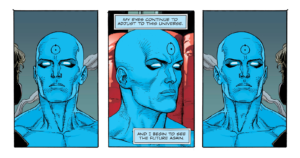 The book opened with…

…with actor Carver Coleman who…

…Doctor Manhattan shows a peculiar yet practical interest in…

…to help him be able to see into the future once more. However, as we see later in the issue, Doctor Manhattan sees his future battle with Superman, but is unclear who wins (full spoilers here).

Carver Coleman meets his end by the end of the issue.

If you’re interested in who Nathaniel Dusk was in classic DC Comics here’s his Who’s Who in the DC Universe bio.

The post credit back matter of the book is seemingly and primarily actor Carver Coleman’s Nathaniel Dusk script blood and all on some pages.

I have to say, this issue had the least interesting “extras” in this maxi-series so far.