This special begins with a few pages origin story so…

…readers are caught up on who the Batman Who Laugh was before he became the Darkest Knight (full spoilers here).

However, like with many on the Dark Multiverse origin stories there is a divergence and…

…readers realize while the narrator is the Batman Who Laughs, now the Darkest Knight, this origin belongs to…

Looks like the Batman Who Laughs orchestrated his / its creation so he could harness his / its vast powers.

However, Wally West The Flash, also with the powers of Doctor Manhattan (full spoilers here) remains a huge threat to his Dark Nights: Death Metal plans.

The second story in the book focuses on the Robin King who also debuted with the Darkest Knight metamorphosis (full spoilers here).

Well, the Robin King is NOT a former Robin in the prime universe, but actual a young Bruce Wayne who…

…grew up sadistic and despite thwarting his parents’ murder at the hands of a mugger, decides to them in himself as…

…well as executing GCPD’s James Gordon and even his father figure Alfred Pennyworth!

There are other stories in this one-shot, but these two preceding ones are most relevant it seems to the core Dark Nights: Death Metal plot. 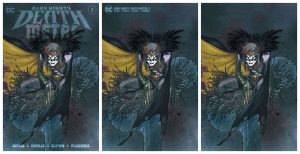 A thrilling opening one-two punch of story. Both with solid stories and appropriately paired art styles. Bravo. Not as convoluted as some of the main Dark Night: Death Metal plot points. 9 out of 10.