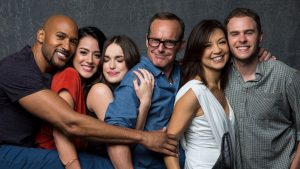 Who Will Die As ABC’s Marvel’s Agents Of Shield Officially Cancelled With 2020’s Season 7?!

Next summer’s Season 7 will be the last for Marvel’s Agents of S.H.I.E.L.D. Thanks to our fans for allowing us to be the longest-running Marvel TV series to-date. https://t.co/1PdHDDKXll

“When you know that’s what you’re doing, you can take greater risks, of life and death,” Marvel TV boss Jeph Loeb says of the conclusion of ABC’s Clark Gregg-led superspy series, which is currently in the last weeks of its explosive sixth season. “Those kinds of decisions suddenly now are real on the table because you’re not playing how do we undo this when we get to the next season. You’re playing that this is going to be the end of the story.”

The cast is appreciative of the support of fans.

The gratitude we feel for the army of incredible fans/friends/agents who gave us this epic journey is difficult to express. It’s a show about a family and you are ours. Thank you. #agentsofSHIELD #CoulsonLives #BadassFanBase