For those keeping score, or wanting to be in other ground-floor of DC’s game-changing weekly Futures End, it actually kicked off this month on the last page of Aquaman and the Others #1.

For the three weeklies, we’ve had teasers images released to hype the mysteries and events to come in them; the Batman: Eternal one was released last Fall, the New 52: Futures End one was released recently while the Earth 2: World’s End one accompanied that weekly’s launch.

It looks like three interesting wallet-gobbling series that build to something; that is the history of DC Comics’ pre-New 52 weeklies after all. Certainly The New 52 Futures End 3D event is hyped as one of the catalysts for Earth 2: World’s End (in addition to the great stuff going on in the New 52 Earth 2 ongoing series), but the wild card is Batman: Eternal. Doesn’t very cosmic-y, but this is a character that tangled with Bat-Mite in the past and with Darkseid in Final Crisis, so anything is possible.

“Prepare to meet the Vampire Justice League of Earth-43, the Justice Riders of Earth-18, Superdemon, Doc Fate, the super-sons of Superman and Batman, the rampaging Retaliators of Earth-8,

the Atomic Knights of Justice, Dino-Cop, Sister Miracle, Lady Quark, the legion of Sivanas, the Nazi New Reichsmen of Earth-10 and the LATEST, greatest superhero of Earth-Prime — YOU!”“Comprising seven complete adventures — each set in a different parallel universe — a two part framing story, and comprehensive guidebook to the many worlds of the Multiverse, ‘The Multiversity’ is more than just a multi-part comic book series, it’s a cosmos-spanning, soul-shaking experience that puts YOU on the front line in the Battle For All Creation against the demonic destroyers known as the Gentry!”

Hmmm. When this was teased before we were going to a get a New Gods centric book on Earth 51 and a Shazam centric book in Thunder World. Plans appear to have changed?

So, what’s the connection between all these huge DC Comics projects? Well, they all end in March 2015. But there’s more too. And its all from the keyboard of DC Comics Co-publisher Dan DiDio via Facebook!

First, Earth 2 World’s End is not a year-long weekly event:

“While Worlds End is only six months long, the ramifications from the story will affect the universe for years to come…

DiDio further revealed the length of The New 52 Futures End:

“…Futures End starts this May and ends the last week of March 2015.”

So, Futures End is an eleven month weekly series.

What about Batman Eternal?

“Batman Eternal started this April and runs to next March after which it takes a brief hiatus.”

It would appear that Batman: Eternal is at a minimum at twelve month weekly series however the word “hiatus” seems to indicate it will continue later in 2015.

Hmmm. So, will all three weeklies end at the same time? DiDio clarified that when he spoke about Earth 2: World’s End again:

“Worlds End starts in October and ends the same week as the others next March, hope that clears things up.”

However, while he didn’t specifically state its end date, in speaking about Grant Morrison’s Multiversity, DiDio did seem to confirm an aligning of stars editorially for March 2015 by using mathematics:

“8 books, on 8 different worlds, drawn by 8 different artists, all tightly tied together. Possibly the most complex work of Grant’s career. And its ready to go!”

Seems interesting that all these big series that deal with cosmic themes like time travel and the multiverse – how Batman: Eternal fits remains to be explained – come to a head in March 2015. Coincidence? I think not!

What do you think DC Comics has planned for April 2015? Or will DC wait to launch “it” during Free Comic Book Day (FCBD) one month later in May 2015?

Lastly, we need your help. Here’s our annotated The New 52: Futures End teaser. Can you help complete it? 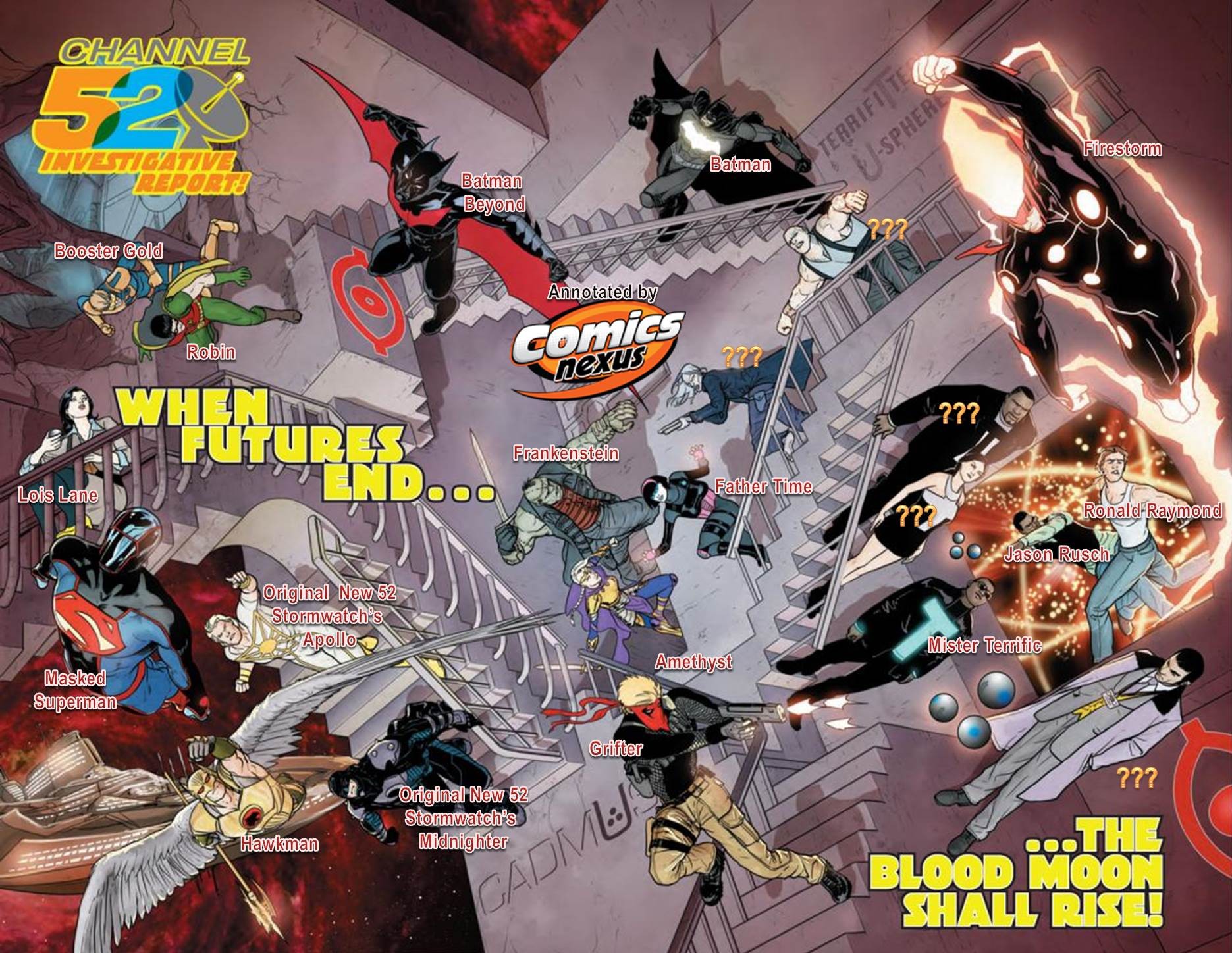